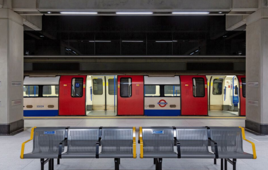 The two new stations comprising London Underground’s Northern Line Extension are due to open to the public on September 20.

Battersea Power Station and Nine Elms are the first new Northern Line stations to be built for 80 years, while the line represents the first significant extension to the capital’s Tube system since that delivered on the Jubilee Line in the late 1990s.

Both new stations are within Zone 1 and join the growing list of step-free sites on the network.

Large-scale construction work on the 1.8-mile twin-tunnel line between Kennington and Battersea Power Station, via Nine Elms, began in 2015.

It was followed by the major tunnel boring work in 2017. Over an eight-month period, two 100-metre-long Tunnel Boring Machines cut through the earth, displacing 300,000 tonnes of spoil that was moved by a conveyor system and then onto barges, which delivered it to Goshems Farm on the River Thames in East Tilbury, Essex. It was ultimately used to develop arable farmland.