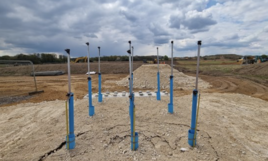 New fibre optic equipment being tested for HS2 is intended to make sure that sinkholes never become a major problem on Britain’s railways.

Although subsidence and uncharted mine shafts are a worry for all infrastructure builders, the Chilterns Tunnel south portal site could play a major part in helping to detect subsidence before it happens. The site has become a testing ground for Sensorgird, which is a stabilising mesh woven with fibre optic cables.

The research is the work of the University of Cambridge’s Centre for Smart Infrastructure & Construction (CSIC) and geosynthetics manufacturer Huesker. It is claimed that installing the mesh can be up to ten times cheaper than having to deal with an incident afterwards.

The technology can sense minute ground movements in embankments and cuttings. This is currently a major concern for Network Rail across the UK, as it tries to shore up ailing cuttings and embankments that are failing due to climate changes and the vibration caused by high volumes of heavy and fast-moving traffic on routes that were not designed for it.