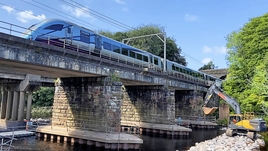 Specialist divers are pouring underwater concrete to protect a pair of railway viaducts on the West Coast Main Line in Carlisle.

Detailed laser surveys carried out by Network Rail revealed that fast-flowing water on the River Eden has caused parts of the riverbed to wash away, posing a risk to the viaduct foundations.

Because of the deteriorating riverbed condition, trains have been running at reduced speeds of 20mph over the Victorian and 1940s-built structures.

Approximately 900 tonnes of special setting concrete is being poured by the diving teams to provide a stable platform for the viaducts’ columns or piers.

Additionally, more than 2,200 tonnes of rock has temporarily been put into the river to calm the waters and divert its flow, aiding the divers as the visibility underwater is poor and much of the work must be done by touch.

Network Rail said its ecology teams have been working closely with the Environment Agency and Natural England to monitor the river and minimise any environmental impacts. The concrete is “wildlife-friendly and safe for the environment”.