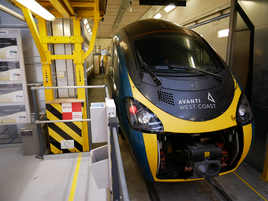 A total of 25,000 new seats, cafe bars and free water refill taps are among the highlights of a major upgrade to Avanti’s West Coast’s fleet of Class 390 Pendolinos.

The £117 million scheme is the largest train fleet upgrade ever carried out in the UK. Some 100 staff assigned to the project will be joined by eight apprentices, and £4 in every £5 spent will be with suppliers in the UK.

The first unit to be revamped (390125) rolled into Alstom’s train care depot at Widnes in late July. All 56 trains in the fleet are scheduled to be completed by February 2024.

“The Pendolino is a real workhorse which has helped to transform services on the West Coast Main Line,” said Avanti West Coast Managing Director Phil Whittingham.

“This investment will take them to the next level, and they’ll feel like new trains with state-of-the-art technology and brand-new seats. I can’t wait to see the reaction from our customers and people.”

Alstom says it will take 16 weeks to convert the first train, as this will include extensive testing and proving of the new upgrades. However, once the programme is under way, it aims to complete the modernisation of a complete nine-car train in just one week.