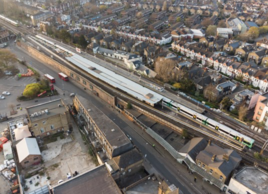 Platform surfaces have also been renewed, and canopies repainted. Drainage has been replaced to help prevent flooding.

Balham station opened on its current site in 1863 and has gone through several name changes since. Trains from the station include services to London Victoria, Sutton, Epsom, Milton Keynes Central and South Croydon. The station is also connected to London Underground’s Northern Line.