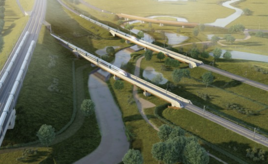 Designs have been unveiled for an area in Warwickshire identified as a Heritage Hotspot that is due to receive two HS2 viaducts.

The area near Coleshill is to be known as Delta Junction - a triangular section of line where the HS2 route curves west towards Birmingham and then runs north towards Crewe and beyond.

Plans include landscaping the local area to create new public spaces, with footpaths and cycleways to enable people to enjoy the area and understand their local heritage. It is known for a medieval deer park, the Tudor Coleshill Manor, and an Elizabethan garden recently uncovered by HS2 archaeologists.

Natural habitats will be created for local wildlife. The designs of the new viaducts allow for space to provide a ‘nature-led’ realignment of the river to increase biodiversity and provide flood compensation areas.

The Design Joint Venture working for Balfour Beatty VINCI JV on the plans for the viaducts involves Mott MacDonald and SYSTRA, working with architects Weston Williamson + Partners. The designs are now subject to consultation with local residents.

Plans to take passengers to Redmire

A fundraising appeal has been launched to restore passenger services on the westernmost section of the Wensleydale Railway to Redmire.