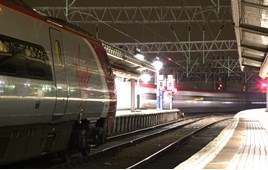 The Government announced its preferred route for Phase 2b of High Speed 2 today (November 15).

While broadly similar to that proposed in 2013, there are a number of changes on the ‘Y’-shaped network, which will connect Phase 1 of HS2 with Manchester Piccadilly, the East Midlands, Leeds and Sheffield.

Plans to serve West Yorkshire with a station at Meadowhall have been dropped in favour of a connection with existing routes to serve Sheffield Midland station. The Government is consulting on this and other proposed changes to the route.

The Western leg (from south of Crewe to Manchester) will be 51 miles long, while the Eastern leg will be 123 miles long. The estimated cost of Phase 2 is £28.5 billion, including £3.7bn for Phase 2a, which will connect Phase 1 in the West Midlands to Crewe.

Parliamentary Assent is expected in 2022, with commissioning and testing in 2032-33 and full services starting in 2033.