Could HST cascade be delayed?

Was this article useful?
8 people found this useful 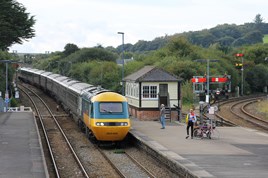 The first HSTs are due to be sent off-lease by Great Western Railway (GWR) in July next year, almost 41 years after the fleet first entered traffic on the Great Western Main Line (GWML).

GWR expects to introduce the first of the replacement Intercity Express Programme (IEP) trains on July 10. As more IEPs are introduced, the plan is for the incumbent HSTs to then be removed from traffic and then head north after modifications.

Industry speculation suggests that there could be a delay to the planned cascade as a result of the late-running GWML electrification programme, which would mean the replacement IEPs built by Hitachi would not be able to operate at full capacity.

But Angel Trains spokesman Rebecca Gudgeon told RAIL on October 11: “Angel Trains owns the High Speed Trains that are currently leased to Great Western Railway and are to be transferred to Abellio ScotRail from autumn 2017 onwards. “Following a programme of works at Wabtec, including PRM modifications , these trains are due to enter service in Scotland from spring 2018. “Given the anticipated delays in the electrification on the Great Western Main Line and the introduction of IEP trains, all parties are working collaboratively to revise the above timescales to meet the aspirations of all. Ultimately, the final arbiters will be Transport Scotland and the Department for Transport.”

@tms1967 @lakesiderailway Entirely possible - but not in that picture. Facing the camera in the bush hat is Michael… https://t.co/sG9HCr7KxQ