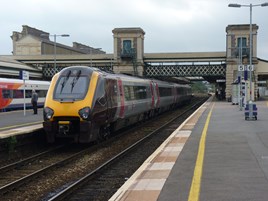 The transport lead of the West Midlands Combined Authority says the recent Direct Award to Arriva for the CrossCountry franchise (RAIL 811) is a “lost opportunity” to boost passenger capacity.

Roger Lawrence said: “The promised ‘39,000 more seats per annum at peak times by December 2017’ appears to equate to just 150 extra seats per day - or just two additional carriages - on the Edinburgh to Plymouth route through Leeds, Birmingham and Bristol.

“This is hugely disappointing, given the continuing growth across the West Midlands rail network and the fact that there has been almost no increase in the capacity provided by the Cross Country rail franchise since 2008/9.

“With many Cross Country trains already full to standing on peak services into and out of Birmingham, this is a critical issue - especially as the next franchisee will not be in a position to introduce additional trains until the early 2020s. The services are overcrowded now - we can’t wait until the next decade.”