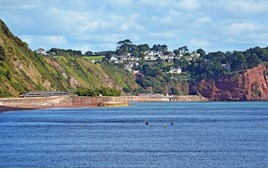 Network Rail is planning to build a 400-metre-long causeway around 30 metres into the sea at Teignmouth, to act as a wave-breaker that will help to prevent cliff falls in the area.

Timing of the project - if approved - will depend on funding availability. The potential cost is £500 million.

In its 2014 West of Exeter Route Resilience study, the infrastructure operator concluded that the risk of rock falling from the cliffs presented the most serious geotechnical risk to the Exeter to Plymouth railway - even more than tidal flooding.

Network Rail Western Region Senior Communications Manager Julian Burnell said the company has completed an in-depth study of the Exeter to Newton Abbot section, to identify which areas need the most action to protect. The other option the company is considering is to strengthen the cliffs in the area and keep the existing railway open.

NR is holding six public consultation events to outline its plans in more detail - on November 17 in Dawlish, November 28 in Exeter, November 29 in Teignmouth, November 30 in Torquay, December 5 in Plymouth and December 6 in Truro.