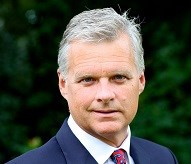 Rail in the north, and around the United Kingdom, is experiencing a renaissance – with passenger numbers doubling in the last 20 years and record levels of investment. However, large parts of the network are increasingly congested, with passengers facing problems with delays and overcrowded trains. There is also a need for new thinking in how railway upgrades are funded in the future.

Network Rail Chief Executive, Mark Carne will talk about the Railway Upgrade Plan across the north, which is speeding up journey times and creating better transport links to grow the economy. He will also discuss the role of new technology in helping increase capacity from existing rail infrastructure.

He will explore how Network Rail is transforming to better focus on customers’ needs, as well as discussing progress on the organisation’s own devolution to regionally focused businesses, including a new role to join-up future rail expansion, modernisation and investment across the north of England.

Sponsored by Alstom and co-sponsors Systra and Morson International, The North: Leading the Way conference will feature speakers from across the industry to deliver key insight into the future of the railway in the North.

Also speaking at the National Rail Conference are:

And many more… To read the full list, visit here

BOOK NOW to secure your place at this significant event for rail in the North.

"It's been utterly thrilling"

Carne discusses the role, the successes and failures, and how the infrastructure company needs to evolve