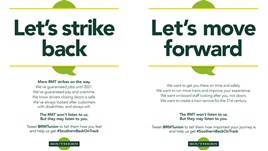 GTR launched a social media campaign inviting passengers to take sides, but it backfired with many passengers angry at an apparent attempt by the company to undermine its own staff.

Under a banner of ‘Let’s Strike Back’, GTR told customers: “The RMT won’t listen to us. But they may listen to you. Tweet @RMTunion to tell them how you feel and help us get #SouthernBackOnTrack.

Hundreds of passengers responded, but not in the manner that rail bosses might have hoped. Hardly any people voiced support, with the messages then enthusiastically re-tweeted by the union and by the campaign group Association of British Commuters. Leading social media news outlets highlighted the campaign as a spectacular failure.

Nik Fletcher tweeted: “My connecting train home has been cancelled every day under revised timetable. And now you expect me to advocate for you?”

Bex Hamilton: “Horrendous campaign. We are customers, not something to beat the unions with. Sort out your own issues.”