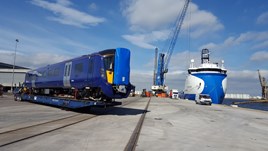 Meanwhile, a second train (385102), a four-car EMU without interiors, has now arrived in the UK following a five-week sea transfer from Japan.  This is destined for testing in Scotland later this year.

Hitachi Rail Europe has begun work on building the remainder of the Class 385 fleet at its manufacturing facility in Newton Aycliffe, County Durham.

Months of dynamic testing will follow, with a comprehensive driver training programme beginning in spring 2017.  The new fleet, delivering faster journeys, longer trains and greener travel, will be phased into passenger service from autumn 2017.