Rail Minister: "Capacity has to be the key concern” 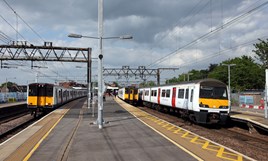 Speaking at an East Anglian Rail Summit in Westminster earlier this month, Rail Minister Paul Maynard said that large schemes in the regions are key to transport plans, stating that it was really important for the rail industry to consider how it can assist people in thinking about how they can work, and how it can play a role in moving people.

He also warned that when it comes to new rail projects, “capacity has to be the key concern”. Highlighting hoped-for improvements to the Great Eastern Main Line, he said: “The importance of speed of journey is great. But bear in mind that that can cause delays while it is being introduced. Does the level of work required justify the disruption? The capacity is just as much of a driver of improvements as line speed.”

"Talks are at an early stage and there is no agreement in place," - Rail Minister on Eurostar's problems