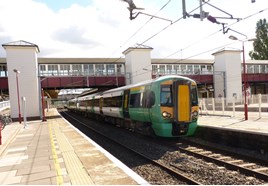 The TUC Congress in Brighton has repeated its call to renationalise the railway as a way of ending the “chaos”.

RMT General Secretary Mick Cash told the Congress that all buses and railways should be brought under public ownership.

“We are facing the most concerted attack on rail workers and passengers in living memory,” he said. “The Government and train operators have declared war on the rail unions and they don’t give a damn if passengers are collateral damage. How else can we explain the scandal that is GTR Southern?”

Southern staff in the public gallery at the Congress were given a standing ovation.

Cash said Secretary of State for Transport Chris Grayling had refused to meet the union to discuss the dispute, adding that Southern and the Government were determined to remove guards from trains “at all costs”.

He said the system was “so corrupt” and “so rotten” that Southern was encouraged to “create chaos by cancelling 350 trains a day”.

Simon Weller, of the drivers’ union, ASLEF, said: “They are looking to introduce agency staff and zero hours contracts, and the Department for Transport is behind it.”

A spokesman for GTR responded: “No we are not.”