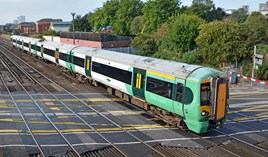 Rail Minister Paul Maynard has denied that plans to increase compensation to Southern Railway commuters are “on the backburner”.

Maynard used his first House of Commons debate since his appointment to urge the RMT union to end its dispute with Govia Thameslink Railway.

He told MPs he was “considering more generous compensation for passengers on this route”, adding: “I want to ensure we focus on restoring normality to the timetable. That has to be the most important task at hand.”

No Labour MPs attended the debate. Green Party co-chairman Caroline Lucas was the only person on the opposition benches, and most Conservatives taking part represented constituencies served by Southern.