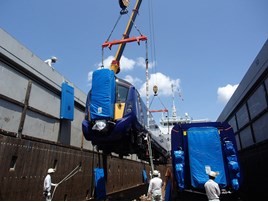 The first complete Class 385 built by Hitachi for use in Scotland arrives in the UK in mid-September.

This is actually the second train constructed, but the first one was being delivered to the Velim test track in the Czech Republic as this issue of RAIL went to press. Testing there begins in September and will continue until March 2017.

The two four-car Class 385/1s were built in Kasado (Japan) and will arrive in the UK via ship. They will be delivered to Teesport, and will then be reformed and commissioned at Hitachi Rail Europe’s assembly facility at Newton Aycliffe before beginning testing in Scotland in November.