EXCLUSIVE: Labour: nationalisation will lower fares and save money 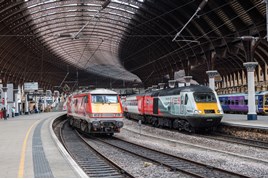 Shadow Transport Secretary Andy McDonald says nationalisation will save money and not lead to additional expenditure if Labour is elected to power. Passengers will receive “lower fares, improved services and more effective investment in infrastructure and stations”, he said.

Responding exclusively to RAIL, he said nationalisation will save money “mainly by significantly reducing the operating costs, through an end to the fragmentation and complexity that follows from the creation of 16 different rail franchises with private companies”.

McDonald added that the cost of running franchise competitions would also end, claiming that in 2014-15 taxpayers subsidised the railway with £4.8 billion and that passenger contributions of around £9bn in fares have increased by 17% since 2010-11.

He also claimed that since privatisation the railway has received almost £72.5bn from taxpayers, adding: “It is clear to us, and I think the public, that the removal of private profit and dividends from the industry would be a considerable source of savings because private rail companies would no longer be siphoning off dividends - in 2014-15 alone £222 million was paid out by private TOCs to shareholders.”