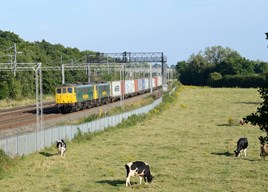 Switching from diesel to electric traction will have more effect on freight train speeds than simply increasing speed limits from 75mph to 90mph, according to Network Rail in its draft Freight Network Study.

Average speeds of freight trains remain low, with those northbound through Crewe running at just 25mph, and those between Immingham and Drax (a journey which would take a lorry around an hour) just 17mph.

Network Rail sampled the two routes in November and December 2015. It found that the minimum and maximum average speeds on the section between Norton Bridge and Winsford were 7mph and 73mph, and from Immingham Biomass Loading Point to Drax 9mph and 26mph.