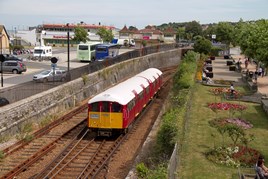 Campaigners on the Isle of Wight say they have convinced the Department for Transport to drop plans for the island’s rail service to become a self-sustaining business.

It had been proposed to separate the service from Ryde to Shanklin partway through the next South West Trains (SWT) franchise after 2019. Islanders feared this would be a step towards eventual closure of the line, which is in poor condition and uses 1938 London Underground rolling stock.

In 2015, then-Rail Minister Claire Perry announced the intention for the Island Line to become a “separate and self-sustaining business”. This was confirmed in June when the Invitation To Tender was published.

It stated that the franchise winner should “work with the Isle of Wight Council to secure a long-term sustainable solution for the future of the Island Line during the course of the next franchise that will enable it to become a self-sustaining business”.