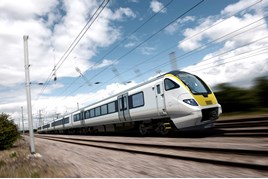 Rail services in East Anglia will be transformed with a mas sive 1,043 vehicle order to replace Abellio Greater Anglia’s entire fleet - the first time since privatisation that a train operator has replaced so many different types of rolling stock at once.

It follows the award of a nine-year franchise to Abellio East Anglia on August 10. The franchise will run from October 2016 to 2025, with £1.4 billion of investment promised. Abellio will pay a premium of £3.7bn over the nine years to run the franchise.

Bombardier will supply the bulk of the order (660 coaches), with Swiss train builder Stadler providing the remainder. The Bombardier units will be based on the Class 345 Aventras being delivered for Crossrail, but with the focus on seating capacity rather than standing space. The trains will come in two versions: ten-car and 240 metres long; and five-car and 110 metres long. All will be electric.

The new trains will be delivered between January 2019 and September 2020, and will include Controlled Emission Toilets and free WiFi (the latter will also be available at every station). The current fleet will be refurbished as an interim measure.

By 2021 the Department for Transport (DfT) claims there will be an additional 32,000 seats on trains arriving at London Liverpool Street in the morning peak. The new franchise will also introduce 1,144 extra weekday services.

Automatic delay repay for season and advance purchase tickets forms part of the deal, and performance targets will be increased from 89.7% of trains running on time to 92.9%. From October 2017 new ticketing initiatives will be introduced, including new offers for part-time workers and those who don’t travel every day. And a Customer and Communities Improvement Fund will be created, investing £9.5 million in what the DfT calls “passenger benefits”.

Secretary of State for Transport Chris Grayling revealed the news at an event at Bombardier Transportation’s Derby factory on August 10. He told RAIL: “This is a tribute to the Derby workforce that they’ve brought in this order. I’m pleased that it’s a British company - it’s an order that will safeguard jobs for many years to come.

“By awarding this franchise to Abellio East Anglia we will improve journeys for people in East Anglia. Abellio’s decision will ensure our train building industry in Derby remains strong,” he added in a statement.

Abellio UK Managing Director Dominic Booth said: “I’m very, very happy. Over the moon. This will be a complete fleet renewal. It’s a unique moment. It comes from my experience of running the franchise and seeing the frustrations of passengers. We’re going to be turning the oldest train fleet into the newest train fleet. It doesn’t get much more transformative than that.”