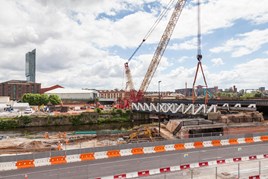 NR has removed the old Princes Bridge, which was a footbridge that obscured the view of (and access to) Stephenson’s bridge. It will now remove a large steel girder to provide a full view of the structure, while at the same time carrying out restoration of the bridge.

Terry Strickland, area director for Network Rail, said: “A new footbridge will cross the River Irwell and will allow members of the public to view Stephenson’s Bridge close at hand for the first time in over 150 years. From there, you will be able to fully appreciate the detail of George Stephenson’s work and have a taste of how the bridge looked when it was first built.”

The new footbridge will be installed later this year. Work to build the Chord will be complete by December 2017.