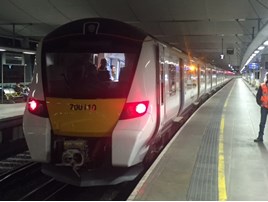 The central section of the Thameslink route will use ETCS to provide Automatic Train Operation (ATO) from 2018 - the first time in the world the concept has been used.

GTR 700110 was the train involved in the test, and further trials will continue in September when ATO is tested on the route for the first time. Network Rail’s Class 313 test train has already operated over the route to test lineside equipment.

ATO is vital if Network Rail is to deliver the promised 24 trains per hour in the core section of the route. The test of a Class 700 is the next stage in proving the infrastructure ahead of full introduction to service in 2018. Network Rail’s test programme will last 16 months.