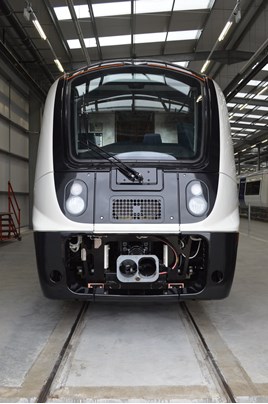 The first Crossrail electric multiple units were unveiled by Bombardier and Transport for London at Derby Litchurch Lane on July 29.

The EMUs will enter traffic with TfL Rail from May 2017 on the London Liverpool Street-Shenfield route, and will be in traffic on the completed project from December 2019. The route is being rebranded the Elizabeth Line from 2018.

“The Elizabeth Line trains, which are a great showcase of British design and manufacture, will be running on part of the network within a year,” London Transport Commissioner Mike Brown confirmed at Derby.

Transport Minister Lord Ahmad said: “The Elizabeth Line and its new trains are a great example of our commitment to improve passenger journeys by investing in one of the most ambitious infrastructure programmes ever undertaken in the UK. This investment will transform the way people travel across London and beyond.”

The trains have been ordered as nine-car EMUs, but the first 15 will enter traffic as seven-car trains before being retrospectively extended to full length later in the delivery programme. Bombardier is delivering the shorter trains because the nine-car trains cannot fit into Liverpool Street’s suburban route until Platform 18 is closed and other platforms are extended accordingly.