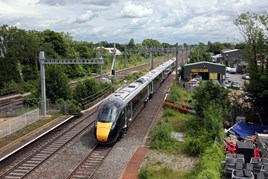 Secretary of State for Transport Patrick McLoughlin revealed the figures to MPs on June 30, responding to a question in the Commons from Sir David Amess (Conservative, Southend West).

During a Q&A session, McLoughlin fielded a number of questions relating to rolling stock in Cumbria, the Midlands and the South West.

Ben Bradshaw (Labour, Exeter) asked about the effect Brexit will have on the overall investment plans, saying: “The Secretary of State will know that the rolling stock serving the South West of England dates from the 1970s, and we are eagerly updating our new, updated trains. What assessment have he and his Department made of the impact of Brexit and the economic shock from Brexit on his overall investment plans for our transport system?”

McLoughlin replied that the investment in the IEP and AT300s that will serve the South West are “very welcome”, and that he was “pleased” that Bradshaw welcomed the investment.

Barry Sheerman (Labour/Co-op, Huddersfield) asked: “The other day, an employee of Virgin Trains East Coast described the refurb of some of the old trains as ‘like giving granny a new dress’. Is the Secretary of State not aware of the state of the rolling stock on the East Coast? When is it going to get better, and how can we justify that sort of rolling stock when we are wasting so much money on HS2?”

McLoughlin replied that Sheerman should be welcoming “the vast investment that we are seeing on that railway line”. He added: “He is now complaining about the upgrading of stock in the interim before the new IEP trains come in. I would have thought he would welcome that new service and also welcome the new service into London that will eventually serve Huddersfield.”

Philip Hollobone (Conservative, Kettering) asked McLoughlin to ensure that with the new East Midlands franchise, the fleet of High Speed Trains used on the Midland Main Line will be replaced with new rolling stock and not a cascaded fleet.

McLoughlin replied: “When we come to look at the franchise for the East Midlands line, I am sure that is one of the many issues we will take into account. It is worth pointing out that since 2010 we have seen almost 5,000 new carriages for use in the UK’s railway network. That is one of the biggest ever upgrades of our railway stock. As a regular user of the East Midlands line, I also hope it will get new rolling stock in due course.”

Sue Hayman (Labour, Workington) highlighted the Cumbrian Coast, stating that a lot of busy trains were formed of a single carriage, and that other trains used stock dating from the 1970s. She asked what the Government was doing to improve the situation.