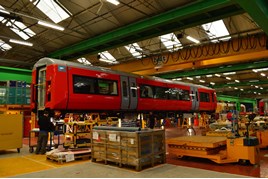 Hitachi, Siemens and Bombardier have all stated their commitment to UK operations, following the result of the referendum on June 23. All three say that while exit negotiations with the EU are key to preserving the train building industry, strong reputations here in the UK give them confidence.

“We remain of the view that the UK’s departure from the EU will create uncertainty and may affect international stability. The UK has played an important role in the EU to encourage competition and drive efficiencies, and we are hopeful that UK and EU policymakers will be able to negotiate an exit that preserves the value created by open relationships between the UK and EU.”

Siemens said it “remains committed to business in the UK” because of its strong local footprint.

It said: “As a global business with significant, long-term investments in the UK and high local value creation, Siemens is not so much exposed to negative effects that we might see. Nevertheless, the Government must now move swiftly to unify and agree the nature of the UK’s relationship with the EU and other trading partners, creating clear roadmaps to encourage future investment.”

Bombardier said it is too early to speculate on potential outcomes or impacts of the decision to leave the EU, but confirmed its commitment to the UK, saying: “We will continue to work with the Government and other industry stakeholders to create the necessary business environment to ensure our future success.

“Bombardier has a strong and established presence within the UK and EU, and a successful track record of supplying our products and services to customers throughout the UK and the EU.

“We have a number of ongoing major UK projects, plus there are other upcoming opportunities and we are committed to meeting the future needs of the UK market.”