Verster hits out at RMT over Scottish strikes campaign 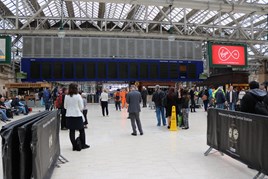 ScotRail Managing Director Phil Verster says the RMT union is “trying to cynically rope ScotRail into a national campaign” over the extension of driver control of train doors.

Strikes by conductors were held in Scotland on June 21, 23 and 25/26. Verster told RAIL he believed the union was trying to link the dispute with that between the RMT action with Southern, adding: “Our whole objective is to modernise ScotRail. We’re investing £475 million in new and refurbished rolling stock and £1.4 billion in infrastructure. Our only objective is to improve the customer experience and service.

“The RMT must get to grips with the idea that the railway improves and that jobs have always changed. All we’re asking for is an openness to improve customer service - it doesn’t seem a lot to ask.”

ScotRail says it has no plans to reduce its headcount of conductors, and that existing pay, terms and conditions will be retained. The operator is introducing 46 three-car and 24 four-car Hitachi Class 385 electric multiple units from autumn 2017 for the Edinburgh-Glasgow and Stirling-Alloa-Dunblane routes, in which drivers will control the doors.