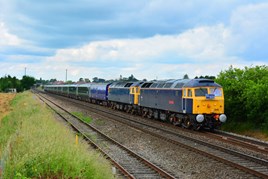 Rail Operations Group has acquired five Class 47s. They are the first locomotives the company has bought outright, and they will complement Class 37/7s hired from Europhoenix.

The first use of the ‘47s’ was on June 17-19, when 47812 and 47848 Titan Star were used to move the last rake of overhauled Great Western Railway High Speed Train Mk 3s from Wabtec Rail’s Brush Barclay at Kilmarnock to GWR’s Laira depot near Plymouth.

ROG has bought the locomotives to meet its expanding operations.