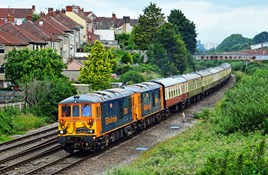 The comments have come in response to an NR consultation on ending the use of rolling stock that drops toilet waste on the track, which the infrastructure company wants to see phased out by December 2019. Franchised services are already due to end the practice over a similar timeframe, and NR has suggested that commitments to making the changes should be incorporated into renewed charter Track Access Contracts from this summer.

Britain’s special trains industry still relies heavily on former BR Mk 1 and Mk 2 coaches that are not fitted with retention toilets, and a cost estimate from NR based on diesel multiple units has put the price of conversion at up to £20,000 per vehicle. In addition to conversion costs, resistance from within the charter market has also centred on the difficulties and expense of servicing the toilets once fitted.