GWR and WSR introduce through tickets 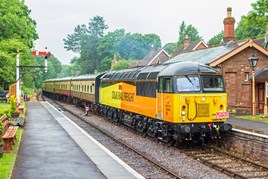 An all in-one ticket featuring travel on Great Western Railway (GWR), the West Somerset Railway (WSR) and local buses has been launched that could bring a £1 million boost to the local economy.

Visit Somerset Chief Executive John Turner said: “We have studied a previous example of this kind of development in East Grinstead on the Bluebell Railway. The Bluebell team saw 60,000 more visitors and an increase of over a million pounds. With some extensive marketing for West Somerset Railway we hope that we can see those types of increases over a five-year period.”

The new ticket allows unlimited access to the WSR, return travel on the bus link between GWR’s Taunton station and the WSR station at Bishops Lydeard.

GWR Partnerships Manager David Gardner said it showed GWR was dedicated to local communities and the region it served. The ticket, he said, was idea for day-trippers who want to leave the car behind.

The ticket offers 19% savings against buying the separate components for those travelling from Taunton. The usual peak-time restrictions are also removed from London for passengers using the ticket, and there is also a discount on entry to Dunster Castle.

To book tickets, visit the GWR booking page, select your destination as ‘West Somerset Railway’, and click the ‘Are you returning?’ option.

2/ chair and plonked him on the front of the stage, his leg stuck out in front of him. He did the gig from there. T… https://t.co/U9TISeNqGe