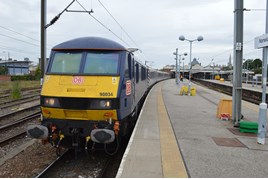 Campaigners expect new trains to be part of the new East Anglia franchise due to be announced soon. But new trains alone, they say, are not enough with infrastructure improvements also needed.

Chloe Smith, MP for Norwich North and Joint Chairman of the Great Eastern Mainline Taskforce, said: “We’ve had a big campaign with huge ambition. We have demanded the highest standards possible. In the franchise soon to be announced we are expecting new trains - that’s a huge part of the campaign - but there is more to do. We need track improvements as well, so the work continues.”

The Taskforce submitted its ambitions to Secretary of State for Transport Patrick McLoughlin ahead of the new East Anglia rail franchise being announced.

In the letter the Taskforce reiterated its desire for new rolling stock to be included in the franchise tender, the delivery of journey time improvements and a comprehensive package of infrastructure improvements.

The Taskforce wants journey times of London to Chelmsford in 25 minutes; London to Colchester in 40 minutes, London to Ipswich in 60 minutes and London to Norwich in 90 minutes.