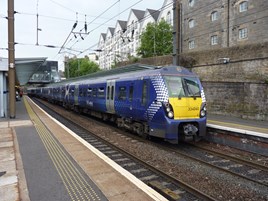 RMT members working for ScotRail have voted for industrial and strike action in an ongoing dispute over the extension of Driver Only Operation (DOO). The first strike is scheduled for next week.

The results of a ballot announced on June 7 revealed a 386-strong majority (of the 411 who voted) in favour of industrial action short of a strike, with 311 in favour of strike action. The turnout was 75%.

The union wants a commitment from ScotRail not to extend DOO, and not to reduce or abolish the safety role of conductors, or reduce or abolish their role in door operation. It claims ScotRail has “refused to answer” questions about the extension of DOO over the life of the franchise, and that new Hitachi trains will have controls for guards to operate doors.