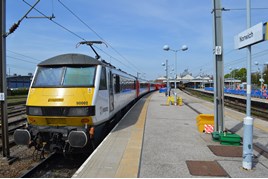 Abellio Greater Anglia has spent £40 million in the past year on “customer-focused initiatives and service improvements”, according to its annual report.

The operator says this is double the investment agreed with the Department for Transport at the start of its franchise in July 2014.

AGA’s Annual Report to Customers for 2015-16 was released on June 13, a few days before the DfT was due to announce the winning bid for the long-term Anglia franchise that starts in October. Abellio, FirstGroup and National Express are the shortlisted bidders for the franchise.