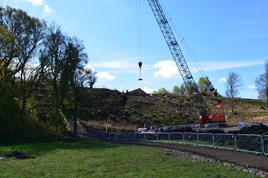 The railway is already being affected by climate change. The risks from higher temperatures, more frequent and more extreme weather, and rising sea levels will influence railway passengers, staff and operations.

These are the conclusions of a two-year study led by the RSSB (Rail Safety and Standards Board). It finds that from 2050 the English climate will be similar to that of central France today. But there will also be greater disruption to rail operations and more damage to railway infrastructure because of increasingly severe winter rainfall.

The Rail Safety and Standards Board (RSSB) has called for better targeting of support for rail workers needing help with mental health issues.