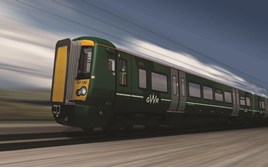 This contract for the new trains will mean that the planned cascade of 29 four-car Class 387/1s from Govia Thameslink Railway to GWR will now not take place.

The new order follows discussions with the Department for Transport, and means that GWR can now go ahead with introducing electric services, initially between London Paddington and Hayes & Harlington.

These will begin in September, having originally been planned to start last month. This did not take place as there were no available ‘387/1s’ to cascade from GTR, because not enough Class 700s were available to introduce on the Thameslink network.

The new trains will be built by Bombardier at Derby Litchurch Lane. Testing of the first GWR Class 387 is already underway.