COVER STORY: Rail freight volumes at their lowest since mid-1980s 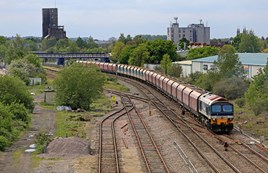 The amount of freight carried on the national rail network is at its lowest since the time of the miners’ strike of 1984-85.

Rail Freight Group Executive Director Maggie Simpson said: “These results confirm that 2015-16 has been a very difficult year for rail freight. The focus now has to be in turning the sector back to growth, and resuming the positive successes of recent decades.”