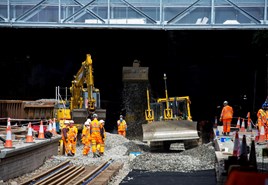 The rebuilding of Glasgow Queen Street has reached the halfway stage with the first line relaid inside the tunnel immediately north of the station.

This was marked by a visit by Scottish Transport Minister Humza Yousaf on June 3.

Since the station closed on March 20, more than 2,100 engineers have completed more than 150,000 work hours to renew the track as well as rebuild and lengthen platforms in the station and alter the track layout. The station is due to re-open on August 8.

Network Rail engineers have removed more than 5,000 tonnes of concrete and rock from Queen Street tunnel, built a new 945m concrete base and installed 820m of new slab track units and 2,000m of new rail.

Yousaf said: “This is a massive logistical operation by Network Rail that has seen over 150,000 hours worked to date.

“This work is literally paving the way for Scotland’s new fleet of electric trains, which will begin to be introduced in to service next year.”

The station will also be electrified before it reopens. Electric trains will start running between Queen Street and Edinburgh Waverley at the end of 2016, with new Hitachi Class 385 electric multiple units being introduced onto the route next year.

A separate scheme to remodel the concourse at Queen Street will be completed in 2019.