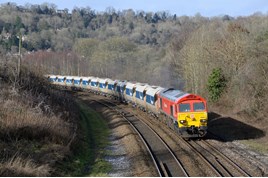 A five-year contract between DB Cargo and Mendip Rail will deliver more than 100 aggregates trains per week.

The deal continues an existing relationship, and includes the operation of ‘Jumbo trains’ that are 44 wagons long and transport more than 3,300 tonnes of aggregates.

DB has introduced a dedicated management team for the contract, and daily joint performance management centres are held at Merehead to focus on performance.

The ‘Jumbo train’ runs from quarries in Somerset to Acton, where it is split into two or three shorter trains for delivery into London and the South East. DB says this maximises the use of paths into the capital, as well as being ‘greener’.