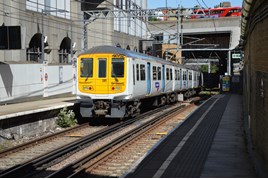 The Department for Transport (DfT) and Govia Thameslink Railway (GTR) have agreed a remedial plan in a bid to improve reliability on Thameslink, Southern and Gatwick Express services, after the operator breached its Schedule 7.1 benchmark for cancellations.

The plan, issued on February 12 but only made public in May, blames a shortage of drivers inherited from previous franchisees, insufficient driver training, higher than anticipated driver turnover, and an “inherited backlog” in driver training for engineering projects and route knowledge.

Other factors highlighted are “unsustainable levels of rest day working”, flooding at Clerkenwell Tunnel (and resulting damage to trains, door and traction motor failures on Class 319s), and technical problems with the introduction of Class 387/1s. Disruption caused by the Thameslink programme at London Bridge has also hindered performance.

However, the report hides much of the analysis of GTR’s problems, with the repeated disclaimer: “Where text has been omitted from the document this is because the Director General Rail or Secretary of State has decided to exclude the text in accordance with the provisions within the Freedom of Information Act 2000.” This includes GTR’s contractual commitments in a new Deed of Amendment, the number of trainee drivers to be maintained, and action on train systems and modifications, as well as detailed figures on driver turnover assumptions and the actual figure.

The RMT says the Remedial Plan will increase the default performance level for train cancellations from 2.01% to a maximum of 2.75%, and claims this will increase the number of trains cancelled before GTR breaches its franchise agreement from 23,391 to 32,000.

Timetable revisions in December 2015 have resulted in the performance of peak services to London Bridge and Victoria improving significantly, while from December 2016 further changes will focus on dwell times at suburban stations and junction margins in south London. Changes to planned maintenance on the Sussex and Kent routes will mean all routes maintained at 13-week cycles to reduce potential disruption.

Driver training and retention is also being strengthened with additional resources, and fleet reliability is being boosted with improvements including dedicated fleet engineers at Bedford depot, performance support engineers at all maintenance locations, and a policy of bringing working practices into line with those at Southern depots, which are said to have better Miles per Technical Incident Number performance.

In a statement, a GTR spokesman said: “The remedial plan contains our commitment to make a considerable investment over and above our franchise agreement in the areas of driver recruitment and training, rolling stock reliability and performance improvement.

“What has now been established is that the assumptions around the capability of the network did not recognise the effects of London Bridge and the Thameslink Programme. The temporary changes to the benchmarks become more challenging again as the plan nears completion.

“The plan accepts an independent study that ‘clearly shows’ there has been a structural change in the operating characteristics of the rail network which has affected the level of delay across our network, including the level of delays we cause. This means that we have not been able to deliver the services required by the contract so adjustments have been made using the contractual mechanisms in the franchise agreement.”