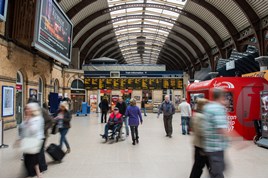 The number of rail passenger journeys made in the financial year ending March 31 2016 topped 1.7 billion, a 3.7% increase on the previous 12-month period.

Figures released on May 9 by the Rail Delivery Group (RDG) show that some 60 million additional journeys were made compared with the previous financial year. The total 1.7 billion journeys made equated to an average of 4.6 million journeys per day.

Revenue generated from passengers rose 5% to £9.3 billion, which the RDG attributes to the increase in passenger numbers. Highlighting the value of investment in the rail network, it said that 97% of this sum would be reinvested.

RDG said that journeys on Anytime and Season tickets accounted for more than one billion of the total. The year-on-year growth included around an 8% rise in journeys on unrestricted Anytime tickets.