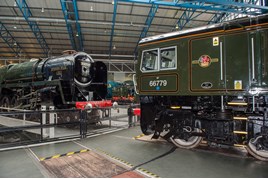 GB Railfreight unveiled the final ever Class 66 to be built for the UK and European markets on May 10.

In a ceremony at the National Railway Museum, 66779 was named Evening Star. It has been painted in lined express Brunswick green, in a similar style to that of the last steam locomotive built (9F 92220), which was also named Evening Star. The two locomotives were displayed together during the ceremony.

GBRf called the ceremony “an historic moment for the rail industry”, and in recognition of the success of the Class 66 (the first of which was delivered to the UK in April 1998), GBRf Managing Director John Smith offered 66779 to the NRM National Heritage Committee.

“The Class 66 locomotive is probably the most successful design to ever run on Britain’s railways, and we have decided to honour their achievements by naming the last ‘66’ to be built after British Rail’s classic 92220 Evening Star,” said Smith.