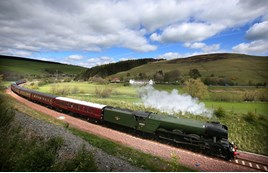 Network Rail Chief Executive Mark Carne is to launch a full investigation into gauge clearance problems that almost prevented the return of preserved ‘A3’ steam locomotive 60103 Flying Scotsman to the Waverley Route and Forth Bridge on May 15.

The locomotive ran from its National Railway Museum base in York to Edinburgh on May 14, and was due to run from Edinburgh to Tweedbank a day later. However, at 1650 on May 13 NR told the train’s operator West Coast Railways that the 1923-built locomotive was not cleared for the Borders Railway to Tweedbank, and that a road bridge at Dalmeny was too low for the locomotive to pass under for an evening run from Edinburgh to Kirkcaldy and returning via Dunfermline on May 15.

In a press statement issued on May 13, NR said: “The routes the Scotsman had planned to cover this weekend are new ones for the locomotive and have to be individually assessed by our engineers in advance.

“Unfortunately we have been unable to carry out the work in time and cannot allow the engine to run when we are unsure if the unique design of the Flying Scotsman is compatible with the current railway infrastructure across the Fife and Borders routes.”