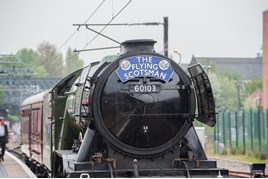 Network Rail has urged people planning to see 60103 Flying Scotsman not to trespass on railway land, otherwise they could face a fine of up to £1,000.

The steam locomotive is running from London Paddington to Salisbury this weekend (May 21-22). In readiness for 60103’s trips both this weekend and on May 28, Network Rail, the British Transport Police and other industry partners have also highlighted the dangers of possible electrocution, as Flying Scotsman will be operating over much of the third rail network.

The warnings come after the locomotive’s return to the main line on February 25 following a decade-long overhaul. It ran from London King’s Cross to York, but the charter was marred by several incidents of trespass that caused 516 delay minutes to 59 scheduled trains and cost NR £60,000 in compensation. Photographs taken on February 25 showed crowds of people, including young children, stood in the path of oncoming trains.

Mark Langman, Network Rail’s managing director for the Western route, said: “While it’s great to see this support for steam engines, and the railway itself, the images of people stood on the railway taking photographs were deeply concerning.

“As well as being illegal, I cannot stress enough how dangerous it is to go onto the railway without any formal training and without permission.

“I am urging those who plan to enjoy seeing Flying Scotsman in the coming days to do so from a safe position, and to not go onto the railway under any circumstances. I’d like to thank those who have observed safe practices during Scotsman’s runs so far, and ask others to follow that example.”

BTP Chief Inspector David Oram said: “We understand people are excited about seeing Flying Scotsman’s return, and want them to have a great day out.

“The railway is a hazardous environment and we would urge people to use safe vantage points to view and take pictures of the train, stay clear of the line and not be tempted to risk their lives and the lives of others by trespassing on the tracks.

“Trespassing on the tracks to view the service is not only extremely dangerous and can result in the train’s journey being delayed, it is an offence for which the offender risks being brought before the courts, a fine of £1,000 and a criminal record. Where people are found to be trespassing, we will take proportionate and necessary action against them.”

To reduce the possibility of trespass, neither NR nor any of its partners are releasing timings for the movements of 60103, including positioning moves.