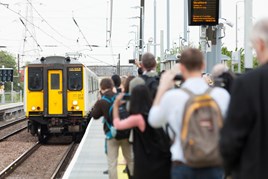 Rail Minister Claire Perry opened the £11.6 million station, which replaces a station at the same site that closed on July 8 1985.

The new station serves business estates in the area and is expected to cater for 350,000 passengers per year. Currently it is served by two trains per hour between Stratford and Bishops Stortford.

Network Rail said that journeys by bus to Stratford and Tottenham Hale would be up to 35 minutes quicker by train.

NR managed the design and construction of the station with VolkerFitzpatrick. The work was done on behalf of Waltham Forest Council and funded by £5m from the council, £1.1m from the Department for Transport’s New Stations Fund and £5.5m from Section 106 contributions, managed by the Stratford Transport Implementation Group.