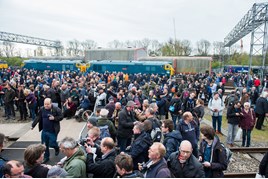 The 40th anniversary of the High Speed Train was celebrated at an open day at St Philips Marsh depot on May 2.

The open day attracted 5,000 visitors, with funds raised donated to Springboard Opportunity Group. GWR spokesman Dan Panes told RAIL that more than £20,000 was likely to have been raised at the event.

Also at the open day, Colas Rail 47749 was renamed City of Truro, albeit without ceremony. The locomotive, one of a batch of ‘47s’ delivered to the Western Region, carried that name from June 8 1965 until October 1988. Colas removed the Demelza name it had carried since September 2007 in favour of its original name.

GWR also displayed examples of its fleet, with Classes 08, 43, 57, 150, 158 and 166 attending the event, along with main line and preserved locomotives, many of which were regular visitors to Bristol.