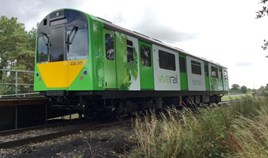 The first D-Train is entering the final phase of testing and approvals, ahead of running on the main line.

Vivarail’s D-Stock rebuild project is nearing the important milestone of being ready for passenger service in the summer, with 230001 being prepared for certification.

Meanwhile evidence capture for the approvals process has been running in parallel - it is expected that all the necessary submissions will have been made to the authorised Notified Body by the end of April.

Vivarail hopes to receive an Interim Certificate of Verification and agreement with Network Rail on network compatibility by the end of May. This will enable main line testing and mileage accumulation ahead of authorisation for passenger service.

The company said in a statement: “It could be said that building a train is the easy part of the equation because, although it may run beautifully, without approvals it’s going nowhere!”

During testing, a new cab and strengthening work has been completed and a new interior fitted (this is just one example of the possible interiors for the new trains).

It had been expected that main line testing of the D-Train would take place by the end of 2015. Vivarail spokesman Alice Gillman told RAIL: “Yes, we are a bit behind schedule - one of the suppliers took longer to get their systems sorted than we expected. However, we plan to have it on the main line in service by late spring/early summer.”

Gillman said Vivarail has spoken to teams at London Midland and Centro about their requirements. The company is also exploring opportunities presented by upcoming franchises, and is in contact with the teams working on those bids.