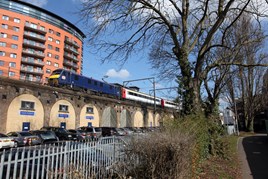 Network Rail says proposed journey time improvements on the Great Eastern Main Line (GEML) from London Liverpool Street to Norwich are said to have a “very significant” cost, and will have to be implanted alongside other enhancement and renewals works to reduce the cost. Level crossing closures and power supply upgrades are also likely to be needed to support faster services.

Should ETCS Level 3 be adopted with Automatic Train Operation - assuming the world-first implementation of this technology on the central section of the Thameslink route proves successful - then capacity from Chelmsford to Liverpool Street could increase from the current maximum of 24 trains per hour (tph) to 32tph.