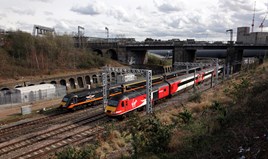 The parent company of open access operator Grand Central made the accusation at a meeting convened by the regulator (the Office of Rail and Road, ORR) on March 4, to discuss the merits of competing bids for paths on the ECML.

It follows January’s launch by the DfT of a consultation into a report by Network Rail Chairman Sir Peter Hendy into NR’s upgrade programme.

In this consultation launch document DfT said: “The appraisal to date of the ECML connectivity enhancement is based upon specific assumptions about the services that will operate on the line. On the basis of this appraisal, the Secretary of State is minded to proceed with this enhancement.

“However, forthcoming decisions that may be taken by the ORR regarding access rights for open access operators on the line could impact on this and may detract from the business case for this enhancement. The Secretary of State’s decision is, therefore, dependent upon the outcomes of the ORR’s decisions on open access and may need to be reconsidered after those decisions.”

At the March 4 meeting, Alliance Rail’s representative said of DfT’s threat to remove funding for ECML improvements, which had been approved as part of ORR’s funding determination for Control Period 5 (2014-2019) back in 2013: “This fund was approved as part of the regulatory settlement, as far as I’m aware, and it would appear to me that the DfT is now trying to retrospectively review a regulatory settlement for something that just doesn’t suit.”