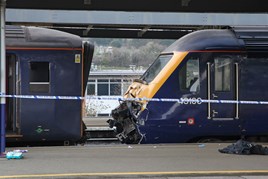 The 1339 Penzance-Exeter St Davids was routed into Platform 6 under permissive working arrangements, and collided with 43160 (the rear power car of the 1542 Plymouth-Paddington) at around 1535. Three people were “heavily injured”, with five described as “walking wounded” and another ten suffering minor injuries.

The Paddington train was booked to depart from Platform 7, but due to defective lifts and the need to load stores onto the High Speed Train, it was re-platformed into Platform 6. The train from Penzance had been due to run into Platform 8 to make a cross-platform connection with the London train, but was re-routed into the rear of Platform 6 to enable a ‘step-free’ connection to be made.

Plymouth station was closed to all trains until around 1700 on April 3, but by the following morning trains were able to run normally.

In a statement issued on April 4 a GWR spokesman said: “Our primary focus has been on making sure that all those involved in yesterday's incident are safe and well.

“While the majority of those taken to hospital have now been discharged, we understand two passengers have been kept in hospital overnight. We have a team with them at the hospital, and are doing all we can to make sure they are comfortable and have everything they need.

“We would like to personally thank the emergency service crews who responded so quickly and professionally yesterday, as well as the GWR and Network Rail staff who helped at the scene.”

Both trains involved in the accident were removed from the station in the early hours of April 4, and will be examined by the RAIB with the assistance of specialist GWR teams. The investigation continues.