EXCLUSIVE: Hynes: “This is about getting people out of their BMWs” 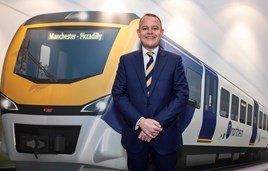 Northern Managing Director Alex Hynes says there are “four big things in the next 44 months” that will revolutionise the franchise.

Speaking to RAIL on April 4, he said these were faster trains, new trains, more seats and more services. He said the key date for the franchise was December 2019, at which point the last Pacers will be removed and the new six-monthly timetable will come into operation.

However, before then (in December 2017) a new timetable will be introduced that will exploit the new Ordsall Chord, allowing Northern to operate trains between Bradford and Manchester Airport. At the same time, North West electrification will have completed the wiring between Preston and Manchester via Bolton, allowing more electric trains to operate.

Discussing union claims of job losses, Hynes said: “There are no job cuts envisaged by this franchise. The head count rises, not falls. We are taking on and training hundreds of drivers. There is also no reduction in front-line staff.”

Regarding the Northern Connect operations, he explained: “This is a high-quality inter-urban new network using brand new trains. This is about getting people out of their BMWs, because the current situation is hit and miss regarding what quality they will receive.”